Daniel Commissioned as a Colonel
On February 27, 1862 Daniel was offered a commission as a Colonel in the 4th East Tennessee Infantry. The official certificate was signed by Edwin M. Stanton, Secretary of War stating that Daniel Stover had been appointed by the President of the United States[1]. As part of his commission Daniel was authorized to raise a regiment of volunteers from Tennessee. Many of the men that had fought with Daniel in the Carter Rebellion joined his unit. Daniel was instructed to submit a letter of acceptance along with his oath of allegiance and basic facts about his date of birth and place of residence. His commission was for a period of three years or the term of the war.

Daniel was also provided with a four-page handwritten letter that described in detail the positions needed to constitute a regiment. It read, “You are hereby authorized to raise in the State of Tennessee one regiment of volunteer Infantry, to serve for three years or the War, of which you are appointed the Colonel. This regiment will be organized as prescribed by the Act of Congress, approved July 22, 1861, “to authorize the employment of volunteers” as follows.” It then listed the maximum and minimum numbers needed to fill each position. The total ranged between 843 and 1023 men. It went on to explain, “The organization of each company of the regiment will be as prescribed by the same Act of Congress” – this added an additional 83 to 101 men, and then stated, “When the regiment shall have been organized, there will be allowed to it one Chaplain, to be appointed by the Regimental Commander, on the vote of the Field Officers and Company commanders on duty with the regiment at the time the appointment shall be made. The Chaplain thus appointed must be a regularly ordained Minister of a Christian denomination. He will be duly mustered into the Service and borne on the Field and Staff roll of your regiment.”[2]

“Capt. Stover must have been greatly admired by the Union supporters in Carter County because many of them traveled by night to join his unit in Kentucky – the 4th Tennessee Infantry. It is said that the “Old Joe Meredith home on Upper Gap Creek was where secret Union meetings were held.”[3] He may have been well liked but according to local historian Robert Nave, “Daniel was not a successful soldier- all of the men under his command were captured.”. Robert noted that “Daniel had no previous military experience.  He was given his commission because he married the President's daughter.[4]

One of the documents that Daniel submitted with his letter of acceptance was a letter explaining that he had in fact sworn an oath to support the Confederacy but that he had done so at the point of a bayonet. His letter described the situation as follows, “In answer to the question asking me if I ever took the oath to support the Southern Confederacy, I make the following statement. Myself, together with thousands other Loyal East Tennessee Union men, were compelled, coerced and forced at the point of the bayonet by the authority of the Southern Confederacy to take an oath. Said oath to the best of my recollection was about in the following words. You do solemnly swear, that your will be a true law-abiding citizen to the Confederate States of America. This oath (if on oath at all) I took under protest and against my will. Contending at the time and ever have followed; that the oath was not binding and that the pretended authority that compelled coerced and forced me to take it had no right to require or administer such. I contend now that I have not yielded a voluntary support to any intended government authority forever or constitution within the United States. General, I was living in East Tennessee until October 1862 when I came through the lines to Nashville, Tennessee on the 25th day of November 1862. I came up with my authority to raise said regiment at Cincinnati, Ohio.[5]”

Daniel’s letter of acceptance was dated December 3, 1862. In it he notes that he was mustered in on November 25, 1862 by Col. Robert Johnson, Commanding the 4th Regiment of Tennessee. Robert Johnson was his brother-in-law. Daniel signed his letter “I have the honor to be your obedient servant”. The official certificate showing his command was signed by his father-in-law, Andrew Johnson who was then the Governor of Tennessee.

From Eliza Johnson's biography we know that "Starting in mid-September 1862, the privations endured by Eliza Johnson essentially made her a wartime refugee. For several nights, she and her daughter Mary Stover also prepared and smuggled food into nearby mountain caves where her son-in-law and his fellow Union military sought shelter and eluded detection by Confederates."

In May of 1863 Daniel submitted a letter that is difficult to read but in it he described the progress he had made in assembling a regiment of men. He concluded the letter by noting that since May of 1862 123 more recruits have come into camps.[6]

The Fourth Infantry was led by Colonel Daniel Stover, Lieutenant-Colonels Michael L. Patterson, James W.M. Grayson, Thomas H. Reeves and Major Gaines Lawson. This regiment was recruited at Louisville, in the spring of 1863, under the direction of Col. Daniel Stover of Carter county, Tennessee. It was composed wholly of exiles from East Tennessee, who were brought out of the Confederate lines by officers and pilots sent in for that purpose.

On May 29, 1863 the regiment left Louisville and was mustered into service the following June. The regiment remained in upper East Tennessee and in the vicinity until July, when it was ordered to Nashville to be mustered out. Col. Stover, who organized the regiment, was early attacked by consumption and saw no service in the field.[7]

The very last paragraph in the 510-page book History of the 13th Regiment provides a succinct summary of Daniel’s life. It read, “Col. Daniel, Stover was a native of Carter county, and married the daughter of Andrew Johnson, who became President of the United States. He assisted in recruiting the Fourth Tennessee Infantry, but owing to ill health brought on, doubtless by exposure in hiding from the rebel authorities in the winter of 1861-62, when he was under the ban of that government for burning the Zollicoffer bridge, he did not see much active service in the field. He died at Nashville, Tennessee, before the close of the war, Col. Stover was a kind and genial gentleman, a loyal citizen and would have made a brave and valuable officer. When the war came, he was an extensive slave holder, but, like a true patriot he was willing to give up all for his country.”[8]

Sickened by Tuberculosis
The biography of Eliza Johnson, Mary’s mother and wife of Governor Andrew Johnson mentions that in early 1863 she sought treatment for consumption at a sulfuric spa in Vevey, Indiana. It also notes that her son-in-law joined her there before they left for Louisville, Kentucky.

As early as July of 1863 Daniel’s compiled service records show that he was absent due to disease. The record stated, "his lungs are very debilitated by frequent pneumonia, he is very dehydrated... and he is unfit to resume duty and won't be for the next 30 days ..." Initially, he got sick while in Louisville, Kentucky, “he contracted a severe cold which affected very seriously his lungs …” On December 8, 1863 a letter written to Col. T.S. George in Nashville described Daniel’s condition in grave detail. He wrote, “I desire to call your attention to the case of Colonel Daniel Stover of the 4th East Tennessee Infantry. He has been for several months seriously indisposed - at times confined to his bed - and unable to perform the duties incidental to field service. As you are aware, this Regiment was recently captured at McMinnville and the other officers are now engaged in its reorganization. I therefore respectfully ask that leave of absence may be extended to Col. Stover until he shall be restored to health as to be able to take the command of his Regiment”

Monthly Compiled Service Records for Daniel for the remainder of 1863 and into 1864 convey similar reports of illness leading up to August 1, 1864 when Daniel wrote his letter of resignation. In it he wrote, “I have the honor to tender my resignation as Colonel of the Fourth Tennessee Infantry. Exposure whilst lying out in the mountains of East Tennessee, to avoid the confederates who were seeking my destination, added to what I have undergone since my entry into the U.S. Service, and has destroyed a once vigorous constitution and rendered me totally unfit for service. I enclose the certificate of surgeon Knoffe who has been my attending surgeon for many months.” In the attached letter R. Knoffe, Surgeon with the 10th Tennessee Regiment reported that Daniel suffered from phthisis pulmonalis which means he had tuberculosis or what was then referred to as consumption. Knoffe added, “he will never be fit for any service.” Knoffe and Daniel’s letters were accompanied by two other letters attesting to the truthfulness of their statements.
A Field and Staff Muster Roll shows that his resignation was final on August 10, 1864. Daniel died in Nashville, Tennessee on December 18, 1864. His body was returned to Carter County where he was buried next to his parents in the Stover section of the Drake-Fitzsimmons Cemetery. Another Field & Staff Muster Roll dated August 2, 1865 recorded a final payment made to his family. Then there is a gap in his military records until 1868 when Daniel’s widow Mary applied for a pension based on Daniel’s service. When the war ended Mary returned to their farm and found the buildings destroyed and the food reserves depleted. Widowed, she and her three children lived with her parents in Nashville. After their father became President, Mary’s sister Martha Patterson proceeded to join the President in Washington while Mary remained in Tennessee with her brothers, mother, three children, one niece and one nephew.

After submitting all the necessary documents and affidavits Mary was granted a pension of $30 per month. After submitting more paperwork, the government added a stipend of $2 per month for each child under the age of sixteen. But when she married William R. Brown on April 20, 1868, she lost her pension. When Mary divorced Brown in 1879, for unknown reasons, she again had to submit documentation to reapply for her pension which was approved by the 47th US Congress on January 5, 1883 as Senate Bill No. HR 3106. 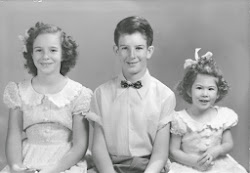 I am the youngest of Ed and Lottie Pattillo's three children. That's me in 1955 with my siblings Kathy and Terry. I'm the family historian and a member of the California Genealogy Society. Previously I published 4 family history books. Now I've decided to write a blog. I hope you'll enjoy it.